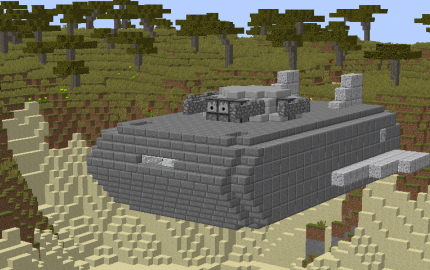 Overview:
The ATVOTA-2 (Armored Transport Vehicle Of The Airborne) is an
update to the earlier ATVOTA-1 Airship Personnel Carrier built by
Gamebreaker Automations Pmc. It is intended to serve as an infantry
fire support vehicle.

Its overall size has been lengthened to accommodate the larger
turret and new protection systems.


History:
The ATVOTA-2 retains much of its design, shape, function, and role
from its predecessor model, as it is mostly an update instead of a
completely new model.

The hull has be expanded by roughly 5 blocks for the new turret and
gun system. Unlike the ATVOTA-1 which uses a low pressure howitzer,
the ATVOTA-2 utilizes a wider, flatter turret with 5 machineguns.

To compensate for the lack of anti-material firepower, the ATVOTA-2
has been fitted with an Active Protection System (APS) that defends
against fireballs and explosive projectiles.

In addition to these newer features, the troop compartment has also
been expanded to accommodate 13 reserve troops. This includes the
full equipment sets of varying roles as well as additional ammunition.

It still retains the base operating crew of a pilot of an engineer.


Armament:
The ATVOTA-2's armament consists of a 5 machinegun array in a flat
rotating turret.


Protection:
Similar to the ATVOTA-1, the ATVOTA-2's armor is composed mainly of
solidified QUARTZ type armor for the sides and most of the hull,
while SLAB type plating is used to protect the top and bottom parts
against explosions.

The front face is sloped to provide maximum deflection capability
against hard projectile attacks from frontal and ground attacking
positions. View ports are multi-layered with ballistic glass, and
the pilot's view port is further protected with SLAB block armor
plating.

The troop compartment is built with thicker, broader walls and
floors so as to provide maximum protection against anti-personnel
attacks.

An Active Protection System (APS) has been installed, which is
activated from the pilot's position. The APS has an effective
defensive radius of 35 blocks default, and provides defense against
fireballs and explosives.

Note that the vehicle's own weapons cannot be fired when the APS is
in effect.


Crew:
The ATVOTA-2 is crewed by the following operators:
1x Pilot (controls the vehicle and its main gun)
1x Engineer (responsible for the ship's engines and carried troops)
13x Reserve Troops (Various roles)