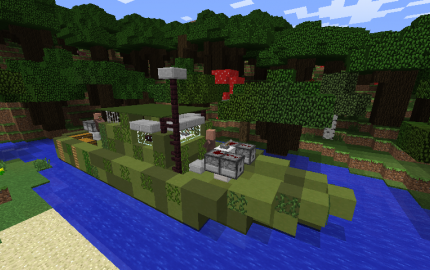 Boat is armed with 2 forward-firing dispensers, and 1 rear dispenser.

Holds 3 crew members, each of which sell custom items. All are immobile via attribute editing.

The buttons and levers in the bridge play radio-like sounds via command blocks. The rightmost one is left blank for custom user input such as /tp.

The lower deck contains the engine room and the crew quarters.