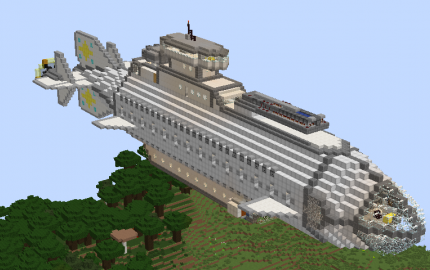 The Nimbus is operated by a crew of 12 players, but can be skeleton-crewed by as little as 4.

1x Obsidia M428 self-loading cannon.
This is the ship's main armament, mounted on the top front section of the hull. It has a an estimated range of over 200 blocks and is semi-automatic. Fire controls for this weapon are in the Navigation Tower and the Main Bridge.

14x Broadside Barrage cannon array. (28 total).
These are self-loading cannons operated from the Main Bridge. They have an estimated range of 50 blocks and are best used fromt 25 blocks onwards.

50x Automatic Fireball HMGs. (100 total).
Each side of the ship's hull is embedded with 25 automatic guns on the upper and lower sides. These are also controlled from the Main Bridge.

4x Lava Veiled Dispenser HMGs.
Pointed forward in the lower deck, can be loaded with Arrows for ground attack.

> All weapons are fed via Droppers and can be safely loaded from the inside with the exception of the Main Gun and the Hydra cannon array.
> Broadsides are internally armored with a layer of slabs for additional protection.
> Windshield in the Main Bridge and other major glass parts are double layered.
> Crew quarters is in the far rear, each chest contains custom armor.
> Command blocks (4 of these) are located in the Main Bridge and Navigation Tower.

Place on airfields or in mid-air for best effect.