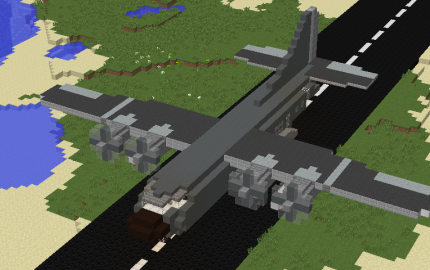 A realistically-scaled, fully functional replica of the Lockheed AC-130 Gunship.

The AC-130 is a series of heavy support gunships developed from the C-130 transport plane during the Vietnam War as a replacement and upgrade to the AC-47 gunship.

The most well-known variant, the AC-130U, is armed with one 25mm GAU-12, one 40mm Bofors autocannon, and one M102 howitzer. Though other versions with different armament exist.

This rendition of the AC-130 is armed with the following weapons:

1. A Two-barrelled autocannon - A tandem-firing autocannon with a lava-veil that can be toggled.
2. A Six-barrelled barrage cannon. - For firing Splash Potions.
3. A Self-loading Howitzer / Cannon. - Has a maximum range of 100 blocks forward and 70 blocks downward.

[*] These are custom splash potions that have been stacked to 64, load these via SHIFT-CLICK only to avoid splitting them up.