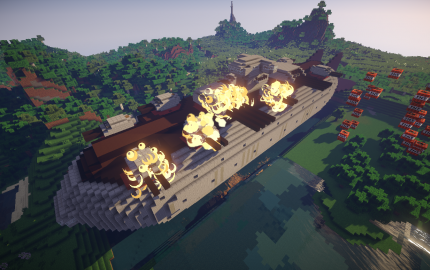 Like all of my warships, everything works. All the guns fire (its quite amazing to behold!), the turrets rotate, and the armor is effective. It does not currently fly, but it will when finished. All the guns use standard Minecraft game mechanics, so even if you don't have Movecraft the guns will work.

I normally wouldn't publish an airship until it is done, and it has been featured in a Minecraft Airship Pirates video. But I decided to make an exception after recieving several requests for this schematic. I think others may be able to learn from the technology in this warship even though it isn't done. Something this big probably won't be completed for several weeks, and the Airship Pirates episode that will feature it isn't planned for another 4 episodes.

I'll put in more details once the episode airs. I don't want to spoil the story... Sufficeth to say that it's a huge warship, the largest ever made up until this point. It's extremely heavily armored, with 4 layers of advanced armor along the gun belt. It's main battery consists of the largest and most powerful guns ever carried aloft. It shoots almost half again as far as the venerable Destroyer Mk II main guns, and with 14 times the destructive force.

Armament (subject to change, listed is what is on the ship now)

2 x Main Battery Turrets, 1 fore and 1 aft - Fires a staggering total of 28 TNT charges per turret. Range is essentially to the horizon. Minecraft cannot track a projectile any further away than what this shoots. Range is controlled by unloading propellent from the dispensers within the turret. The turret is rotated by right clicking the "Subcraft Rotate" sign. The weapon can be completely serviced and reloaded from within the protected turret. It can either be fired by the main FCS system, or by a manual button within the turret. Number of TNT projectiles and fuse duration is configurable by repeaters within the turret.

8 x Secondary Armament Turrets, 4 fore, 2 midships, 2 aft - Fires 2 TNT charges each. Range is less than the Destroyer Mk II main gun, but more than most other weapons. Range can be limited as desired by removing propellent from the dispensers within the turret. The turret is rotated by right clicking the "Subcraft Rotate" sign. Can be fired either by the main FCS system, or by a manual trigger in the chamber right below each turret. Fuse duration is configured by repeaters in the FCS control room.

79 x Fire Guns, 9 fore, 34 on each side, 2 aft - Used for fighter screening and shooting down enemy torpedoes. Also useful to set enemy warships ablaze once their armor is pierced by the cannons. Not currently wired in to the controls. For examples of functional Fire Gun batteries, refer to my other completed warships.

Broadside - 2 Mains and 4 Secondaries for a staggering total of 64 TNT charges plus 34 fire guns. Thats right, an entire stack of TNT per shot. Ouch.

Fire Control System (FCS) - located bellow the gunnery bridge. From here you can control all the TNT cannons on the ship. You control which turrets are armed ("hot") by a board with a switch representing each TNT cannon. All hot weapons can then be fired by a singe button in either the FCS room or the gunnery bridge.

Gunnery Bridge - Elevated to give line of sight over the massive Main Battery, this would be where the Goliath is typically controlled during a fire fight.

Navigation Bridge (unfinished) - At the bow of the ship, this is where you control the flight of the ship in day-to-day operations, as it gives greater visibility than the Gunnery Bridge.

Aft Bridge (unfinished) - typically only used during emergencies, the ship can also be navigated from here.

Interior of the Battleship is completely unfinished at this time, but will eventually include crew quarters, a hangar for smaller aircraft, a war room, and other ammenities. Have a suggestion for something that should be on this ship? Let me know.