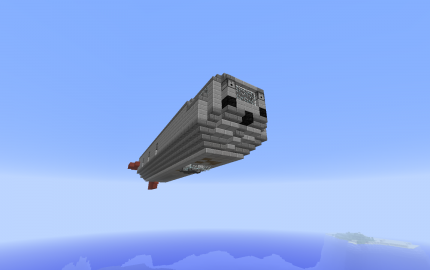 A Zeppelin style airship that can be flown using the Movecraft plugin for Bukkit. The torpedo version is a retrofit of the old Corvette class.

Main Bridge controls navigation, torpedoes and all guns on the ship
Bombs can be dropped from the Bomb Bay, directly aft from the Main Bridge.
Aft of the Bomb Bay are the corridors that lead to the port and starboard guns and the engine room and hatch in the rear
There is a bed, and some simple amenities in the middle of the ship for long voyages
Entry into the ship is gained by climbing the ladder on the tail and climbing through the hatch. The hatch can be closed by a lever during flight.

2 x Forward facing rapid fire machine guns
- Fired using the lever towards the front of the bridge
- Can be loaded with arrows for ground assault or fireballs for aerial combat
- When loaded with fireballs, effective for setting unarmored airships on fire