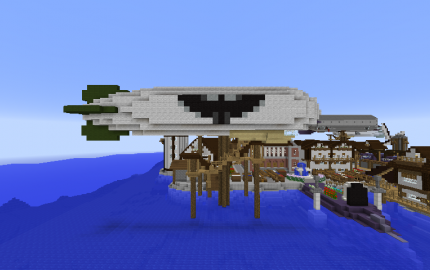 This is an airship which can be flown using the Movecraft plugin for Bukkit / Spigot. This is an example of a typical merchantman airship from the Minecraft Airship Pirates series. In this case, a tramp with the insignia and colors of Frigga's shipping business. Or, as they are called, one of Frigga's "Ravens".

Not only do they serve well as merchantmen, but Frigga's Raven's also serve a vital role in collecting information. Many of the Ravens were seized as prizes by Bellamy's group, and then sold to Frigga for her shipping business. Once the Raven is placed on their hull, other groups know better than to molest them.

Although officially Frigga's shipping business is completely legit and has no ties with Bellamy's pirate group; unofficially everyone knows attacking a Raven means the Shadow will soon come pay you a visit, generally ending with the perpetrator being blasted to pieces by the Shadow's guns.

In the attached video, you can see several merchantmen towards the end of the video.

In the overhead shot of this ship, you can see a Minnow Mk II nearby. I took that picture to show the difference between military and civilian ships. The merchantman is completely unarmed and unarmored. But both ships are actually the same mass, even though the military ship looks tiny compared to the merchantman. Which just goes to show you, all that armor and weaponry really does weigh a lot, keeping the ship size small. Also the merchantman has much more net lift than the military ship, so it can carry much more.