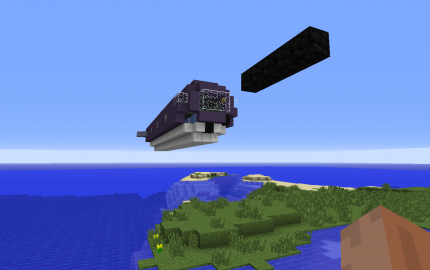 The Minnow class of torpedo airship was created in the aftermath of the Battle of the Argean Sea (covered in the Minecraft Airship Pirates: The Big Score series of videos). Although the Kingdom was substantially weakened by the loss of their fleet, the pirates had suffered losses of their own and, more importantly, could no longer keep their base of operations hidden.

Therefore, Robert Bellamy and his pirates devised a class of submersible airships that were small and easy to construct, yet still capable of holding their own against larger ships.

Every effort was taken to reduce weight due to the ships small size. Armor was restricted to those portions of the ship most likely to come under fire, and the ballast tanks were left exposed on the bottom of the ship. Also the interior of the ship was extremely cramped. Yet in spite of these shortcomings, the Minnow filled a vital role in Bellamy's emerging fleet, providing numbers when the pirates needed them most.