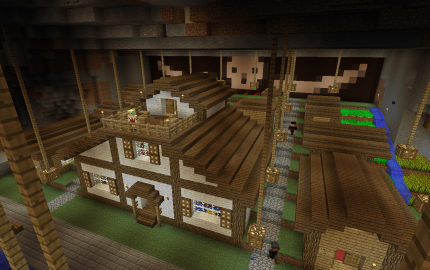 This is the Den of Thieves, featured in Minecraft Airship Pirates Episode 1. The Den of Thieves serves as a hidden base of operations for the infamous airship pirate, Robert Bellamy. Here the pirates can rest, re-arm, and repair their ships. As well as sell any booty obtained from their latest prize. The Den is hidden deep underwater in a massive cavern, nearly undetectable from the surface unless you already know where it is. The only way of gaining entry is aboard a submersible craft, like the pirate's submersible airships.

It features:
- The Salty Wench, a fine tavern for rest and relaxation in preperation for the next adventure. Watch out for the drinks at the bar. They can be a little stiff.
- Several arms and armor merchants to purchase the latest tools of the pirate trade.
- "Guest Lodging" for any captured crew where they can await ransom, or the wise among them may choose to become pirates themselves.
- Airship cradles to hold the massive pirate airships for repairs or refit

**intended to be pasted underwater at a level of about 32. You will be in the middle of the cavern after pasting**