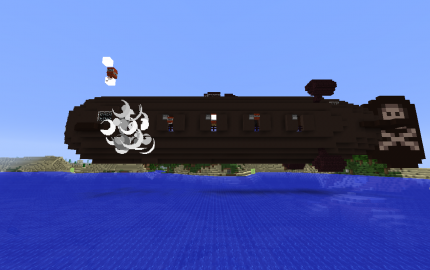 This is an older version of this ship, which still includes the cosmetic pistons. They were removed because they cause problems while the ship is moving. Also moving under certain conditions can cause the cannons to explode. The new version that fixes these issues is here:
http://www.minecraft-schematics.com/schematic/2261/

This unique warship combines the stealth of a submarine with the battlefield control of an airship. Huge ballast tanks in its belly allow it to submerge and lay in wait for its prey, staying hidden until it is too late for any passing merchant to flee. There is a trade off, however. Her hangar is small for a ship her size. But with typical Pirate ingenuity, they manage to fit 2 fighter-bombers within the claustrophobic hangar bay. She has no bomb bay either, although her 5 massive naval auto-cannons more than make up for any deficiency.

Layout:
Main Hatch - Midship, on the top side. Can act as an auxiliary bridge if necessary. Entry leads to a staircase leading down in to the ship. Leads to Captains Quarters, Crew Quarters, and the Ship Stores

Captains Quarters - Luxurious apartments fit for any Pirate King. Iron door can be locked from either side. Huge bed with panoramic views around the ship. Boxes for the Captains most valuable possessions. An enchanting table and library is also provided.

Crew Quarters - bunks for the ships crew. Also has the staircase leading down to the Main Corridor.

Main Corridor - connects the Engine Room in the rear, all the Port TNT Auto-Cannon Decks, the staircase to Crew Quarters midships, and the Main Bridge in the front.

Main Bridge - Controls the Port Gun Ports, navigation, and all ship-board weapons. Stairs down lead to the Hangar Deck

Hangar Deck - Houses 2 specially designed fighter-bombers, as well as the massive ballast tanks that allow underwater operation. Separated from the rest of the ship by piston-operated emergency bulkheads.

5 x Port Firing Naval TNT Auto-Cannons - This is the ships main armament, and from which it gets its much deserved reputation for deadliness. Each fires 5 TNT charges for each salvo, delivering a ship-shattering 25 TNT projectiles per broadside. Gun ports controlled from the Main Bridge prevent flooding during underwater travel. Range is configured beneath the bridge. NOTE: DO NOT FIRE WHILE MOVING

21 x Starboard Firing Fireball Guns - This is the ships secondary armament, used primarily for defense from enemy fighters. Can also be used to set enemy warships alight once the Auto-Cannons have pierced their armor. Controlled from the Main Bridge.

The pistons sometimes cause problems blocking the ship from moving. If you have trouble, you can remove all the pistons. They are only cosmetic.