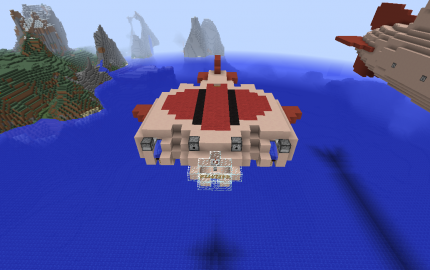 An airship that can be flown using the Movecraft Plugin for Minecraft. Fully functional, all weapons work. The airship is seen only briefly in the attached video, escorting the carrier.

The Warship Assault airships of the Silver Empire were designed primarily to support fighters attacking enemy warships. Fighters were particularly vulnerable to fireball attack, and therefore the Assault ships would provide a screen protecting the more vulnerable fighters from retaliation, allowing the fighters to launch their torpedoes from safety.

Assault ships were designed to be cheap to build and easy to mass produce.

Notes:
You may not see the explosion of your cannon shells, as they may be too far away to be seen. To fire at closer range either adjust the fuse on the cannons using the repeaters in the cockpit, or only load 2 of the 3 propellent dispensers in the cannons themselves.