South Haven - Airship Pirate Base and Hub of Commerce 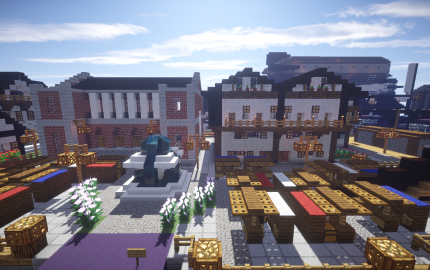 South Haven was founded in 752 AED in the wake of the terrible Battle of the Argean Sea. The city was built on the wrecked hulls of the ships that were lost in that battle, which had settled into the shallow water. Robert Bellamy's pirate group operates out of the town, and it is a major nexus of trade operated primarily by the South Haven Shipping Consortium (whose security is guaranteed by Bellamy). The city is an odd mix of pirates, merchants, and ex-Royal Navy sailors who survived the climactic battle.

Major features of the town are:
Airship Gantries
There are two airship gantries, one on the north side and one on the south side. These serve primarily Frigga's Ravens, but also occasionally serve other airships that come calling. Each gantry has 4 docking positions that can be used simultaneously.

Loading Docks
There are also 2 loading docks, which serve primarily the signature Submersible Airships of Bellamy's pirate group. Near the loading docks are the loot warehouses, which are kept locked and guarded constantly.

Shipyards
There are 3 construction harnesses where work crews labor constantly to build more Submersible Airships for Bellamy's pirate group. Currently in the harnesses are 2 Minnow Mk II's in various states of construction.

Housing
There are numerous houses of various sizes and types located throughout the city. Most are multi-family residences owing to the cities necessarily compact architecture. All are fully furnished.

The Salty Wench Tavern and South Haven Shipping Consortium Headquarters
The largest building on the central island, the Salty Wench serves as both a hub of commerce and leisure for the city. It has numerous rooms catering to a variety of clientele. All are fully furnished.

Town Hall
The town hall serves as court room, government chambers, and municipal building. The open architecture of the building reflects South Haven's free society, where any citizen can watch the functioning of government.

Frigga's Mansion
This simple yet elegant building serves as the home of the head of the South Haven Shipping Consortium, Frigga. And, often, also that of Robert Bellamy.

Notes
Stand on a block at sea level while pasting. You will be near the center of town when its done.

There are several airships and subairships throughout the town. They can all be flown using Movecraft, which you can download here:
http://dev.bukkit.org/bukkit-plugins/movecraft/