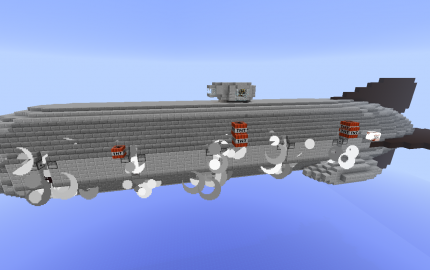 This is a Battleship, or a Line-Of-Battle Ship that is designed to be flown using the Movecraft Bukkit plugin.

There is nothing subtle about the Victory class of Battleships. The design is simple and straightforward, focusing on brute strength rather than flexibility. As a Line-Of-Battle ship, its powerful cannons are designed to be shot to the sides, and it has minimal anti-aircraft or other supplemental armament. She is designed to do one thing, and that is to blow enemy warships to pieces. And that she does well. By the time of the famous Battle of the Argean Sea, the Victory class of Battleships already had an established reputation for resiliency combined with brutal force.

Unfortunately, the direct ship-to-ship combat that Battleships were designed for was ill suited to the combat tactics employed during the war with the Silver Empire. The Empire favored large numbers of fighters and smaller warships swarming their enemies, with any larger carriers and support craft far out of reach of the Kingdom Battleships. After several desperate attempts to refit their Battleships, the Royal Navy was eventually forced to abandon the venerable design.

Armament
5 heavy naval cannons port and starboard, for a total of 10 cannons. Each cannon shoots 2 TNT per volley - fired from the Gunnery Bridge, which sticks out on top of the envelope for better tactical awareness DO NOT FIRE WHILE MOVING
Forward and rear firing repeating guns which can be loaded with either fireballs or arrows