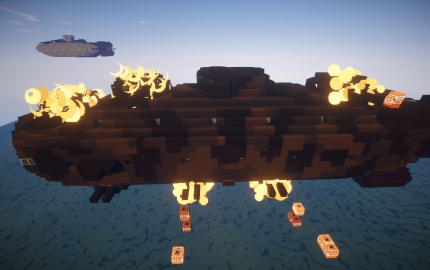 This ship flies and fights using the Movecraft plugin for Bukkit/Spigot servers. However the weapons are all just redstone devices and will work fine without Movecraft. So feel free to use this in your RP/Adventure maps.

This is the third incarnation of the notorious Shadow fo the Deep. It was built towards the end of the War of Acquisition using components salvaged from the original hull. It is nearly twice the displacement of the former model, and was designed with heavy combat in mind. In addition to 3 heavy adjustable arc naval scattershot cannons on the top of the hull, a groundbreaking belly turret was custom designed for the Shadow, bringing the total ship armament up to 6 turreted heavy cannons. Additionally, the belly turrets granted an additional angle of fire, allowing targets to be attacked from below. Most warships of the day focused their armor on the upper portions of the hull, so the importance of this ability can not be overstated.

Additionally, the fighter capacity was expanded to 6 fighters, arranged in 2 vertically stacked groups of 3 fighters each.

Also, the weapon systems of the ship may be controlled from 3 places, the Gunnery Bridge, the Navigation Bridge, and the Belly Bridge. So the ship can not be put out of the fight by destroying any one location.

Finally, the armor reinforcements was completely redesigned using lessons learned from the previous models. Reinforcements were spaced throughout the hull, allowing space for explosive force to be absorbed while still protecting the ships vital wiring and mechanisms.


Layout
Gunnery Bridge - Main combat control area. Located on the top of the hull. From here, all weapon systems can be controlled including the top turrets, the belly turrets, and all AA guns.

Ventral (Belly) Bridge - Secondary combat control area. All belly turrets and the lowest string of AA guns can be controlled here. Used in emergencies when the Dorsal Bridge is out of action.

Navigation (Nose) Bridge - Used primarily for navigation, since it commands an excellent view in front of the ship. The front 2 top turrets and all AA guns can be controlled here.

Captains Quarters - Luxurious apartments fit for any Pirate King. Huge bed with panoramic views around the ship. Boxes for the Captains most valuable possessions, and an enchanting table and library is also provided.

Main Corridor - connects all the compartments of the ship.

Main Bridge - Controls Navigation and all ship-board weapons. Stairs down lead to the Hangar Deck

Hangar Deck - Houses 6 advanced torpedo fighters. In this schematic, the fighters in the hangar bay are Skull Squadron fighters with their characteristic white and black coloring.

6 x Naval Adjustable Arc Scattershot TNT Cannons - Each fires 10 TNT charges for each salvo, delivering a ship-shattering 60 TNT projectiles per broadside. Arc can be controlled from a repeater from any of the bridges. The more clicks on the repeater, the higher the arc. The trigger is the button near the repeater. NOTE: Do not fire belly turrets while they are facing forward. Forward facing is for underwater storage, to protect the guns from the water. The belly turrets are designed to be used while facing the broadsides only.

38 x Fireball Guns (19 on each side) - This is the ships secondary armament, used primarily for defense from enemy fighters or shooting down torpedoes. Can also be used to set enemy warships alight once the cannons have pierced their armor. Controlled from the various bridges.

2 x Firegall Guns - For shooting down other fighters, or setting enemy warships alight once their armor has been pierced.