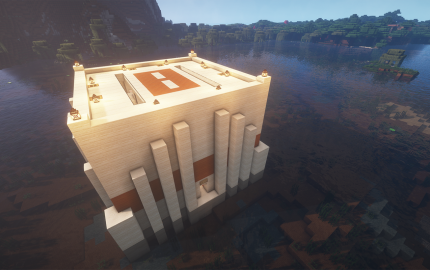 An 'end-game' device, yet another player launcher but with awesome mechanism and a relatively delightful interior.

Features:
- Launches player 1500m+ up vertically.
- Glorious for launching an elytra in survival, especially in the end.
- Core mechanism is only 11 x 11 x 13, you may extract it by a structure block on your own.
- With completely hidden rooftop. You can build it underground to make it kind of an ICBM silo (except you are the missile)!
- I'm not calling this a survival friendly one, but it is probably the best kind of challenging design you may build for the all-biome achievement (with elytra).

How to import (in vanilla MC):
1. Read the instruction about structure block on wiki.
2. Place the nbt file under {MC directory}/saves/{your world}/generated/minecraft/structures/.
3. Open your world and type: /give @a minecraft:structure_block 1.
4. Always Include Entities. If you load more than once, turn it off on consequent loads.
5. Load it into your world, structure name = file name.
6. If anything goes wrong, load it twice after 5 seconds.
7. Replace the structure block with sandstone and it is done.

How to use:
1. Get your elytra in the end (optional; you may use ender pearls to survive as well).
2. Stand in the very middle of the red sandstone wall mark on the launch platform (screenshot taken).
3. Click the button behind right trapdoor (you can open it and reach that, I'm sure). Do not move and wait.
4. 3...2...1... Ignition sequence start, all engines running... Do not panic, you may look at the ceiling for the magnificent opening, and liftoff!
5. When you reach the limit, spread your wings and soar, the adventure is out there for you!

Caveats:
- 60 TNTs per launch, almost costs a stack.
- If you see water leaks in the ignition chamber after it is loaded, there is a lever outside nearby, flip it back-n-forth to get fixed.
- Occasionally (chance is negligible on high-end PC) this device may self-destruct perpetually after import. The fix is to execute command /kill @e[type=tnt] right after the launcher is loaded. I would kinda recommend a backup of your world, but indeed I have a terrible PC which lags a lot, and weird things like that happen randomly.
- As you can see, the screenshot is a little bit different than the actual build. Since a very curious bug happens that some of the dispensers (at the bottom) will be marked as triggered even not powered so they won't dispense any TNT after 1st time launch, kinda like this one, so I have to use pistons beneath those dispensers instead of glasses to make some BUDs (IMO that looks better for being like an exhaust system).

~ The 3x3 trap door part is originally designed by Mumbo Jumbo (Youtube). I made mine in the previous version but it was just not so compact as his so I decided to give him a credit in this update.
~ Sorry for the re-uploading. I have changed the number on the rooftop to '8' for you to confirm. You can have no trouble to make it the screenshot design if the MC official fix that bug I have mentioned.
~ Thanks to BSL shaders and Soartex resource pack for the amazing screenshots.
~ Enjoy, please endorse if you like it, and have fun.