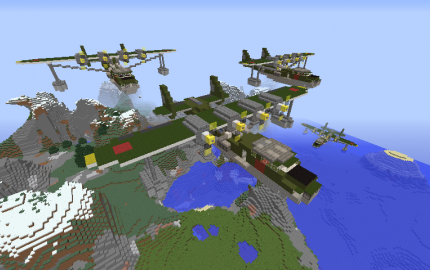 A realistically-scaled functional replica of the Japanese H6K flying boat.

The Kawashini H6K flying boat, also known as the Type 97 was a large-sized flying boat designed by Kawashini in 1936 and used by the Imperial Japanese Navy during the Second World War. It was used primarily as a naval bomber and maritime patrol plane.

Due to its large hull size and its use of four engines, the H6K had a very long endurance and service range, making it ideal for missions over stretches of endless seas.

This version is built to be crewed by four players and as such contains four chests loaded with custom items and equipment and four beds.

Note: The Waist guns are powered by the same pulser. Turn the Repeaters behind the Dispensers On or Off to alternate between Left and Right guns.

Place in mid-air or in water (3 blocks deep) for best effect.

Important: Certain blocks such as Dispensers and Stairs may face the wrong direction when the schematic is rotated, flipped, or mirrored.