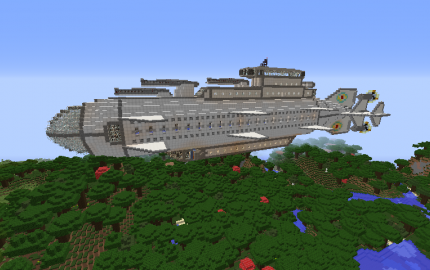 The Cumulo Nimbus class of combat airship was designed and built as an extended development and drastic upgrade to the Nimbus airship.

After an extensive service career as a multirole capital airship, it became clear that the Nimbus-class was slowly being outclassed by contemporary competitors in two major aspects: firepower, and range.

In response to the need for improved firepower, the 14-gun Broadside Barrage used on the Nimbus was replaced by the Obsidia M15 self-loading howitzer/cannon (the same weapon used on the Sunderland flying boat). The Cumulo Nimbus was also upsized to carry the larger cannon; 20 of these, in each broadside.

The same model of main gun was re-used on the Cumulo Nimbus, this time three of them were installed, giving the ship three times the forward firepower while maintaining the same effective range.

Armor was also improved on the Cumulo Nimbus. The frontal bridge's windshield was triple-layered, with multiple vital parts of the ship having a layer of iron framing sandwiched in between the ship's outer armor and interior.

The Cumulo Nimbus was crewed by a total of 12-14 operators.

3x Obsidia M428 Self-loading cannon.
These cannons are mounted on the top of the ship's front half. All three are wired to be able to fire from the bridge and the tower. Each cannon has an estimated effective range of 150 to 200 blocks.

20x Obsidia M15 Self-loading Howitzer/Cannon. (40 total)
An improvement from the Broadside Barrage. Has an effective range of 70 to 90 blocks.

40x Fireball HMGs. (160 total)
Each side of the ship's upper and lower broadsides are embedded with these HMGs.

6x Lava-Veiled HMGs.
Pointed forwards in the ordinace bay, can also be loaded with arrows as an alternative for ground attack.

> All weapons are fed via Droppers and can be safely loaded from the inside with the exception of the Main Guns and the Hydra cannon array.
> Broadsides are internally armored with a layer of slabs and iron bars for additional protection.
> Windshield in the Main Bridge and other major glass parts are multi-layered.
> Crew and officers' quarters are in the far rear, custom equipment is supplied for each position.
> Command blocks (10 of these) are located in the Main Bridge (6) and Navigation Tower(4).

Place in airfields or in mid-air for best effect.

Edit(s):
>Corrected the Circle Stone Brick "Frame" On the left side of the ship.
>Replaced the Lever on the Fire Control block in the Tower with a Button.