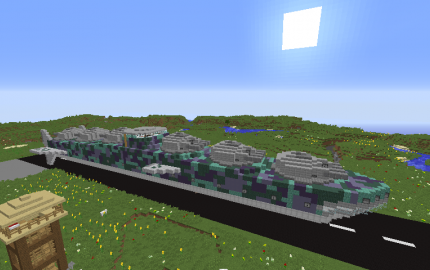 Overview:
The Barracuda 2 is an upgraded refit of the earlier model of destroyer. This version is designed as a full size fire support battleship designed and manufactured by GameBreaker Automations.

Improvements have been made to its overall firepower and mobility.


History:
The Barracuda is built to act as an intermediate vehicle between full-size battleships and smaller corvettes and frigates. It is lightly armored, utilizing most of its available volume for maximized firepower and destructive power.

Unlike full size battleships, the long slim profile of the Barracuda allows for it to maintain high attacking speeds and maximum manoeuvrability in high-risk engagements.

It is intended to act as an escort destroyer for larger vehicles such as the Stormcloud class battleship. But had been previously unavailable due to developmental problems and technical difficulties with its APS modules.

While the Barracuda has been well-received by its operators, its most notable drawback is its lack of damage output despite mounting six turrets. Following this feedback, the Barracuda 2 has been refitted and expanded to accommodate a set of larger scattershot turrets with a flatter targeting arc, submersible capability to ensure survivability, and a new disruptive camo pattern.


Armament:
Its primary armament is comprised of six QST (Quad Scattershot Turrets), the design of which is derived from an earlier unnamed schematic of scattershot gun turret built by Warshipmaster792. While the original design fires 8 shells per salvo, this derivative has been upgraded to fire 16 shells per salvo, and has been mounted in an armored turret.

The guns are designed for naval use and utilize retractable ballistic fluid to enable the vehicle's submersible capability.

The vehicle is further surrounded by a full broadside of 13 AA Guns on the left and right sides, with another 6 AA Guns in the forward and rear positions.


Protection:
Similar to its predecessor, the Barracuda 2 carries light armor in order to maintain its agility in the heat of battle. As such it is fitted with a full-coverage Active Protection System (similar to the type installed on the earlier ATVOTA-2) consisting of three centralized modules to protect against explosive and incendiary projectiles.

The protective radius of the APS varies around the vehicle, it is defaulted to 25 blocks at the front and rear ends, with the middle body being set to 30 blocks.

Note that the vehicle's own weapons cannot be fired when the APS is in effect.

Crew:
The Barracuda 2 class destroyer has a crew of 6 operators in the following layout:


Important: Do not fire the Turrets on the 4th click while pointed forward/rearward, as this arcs the shells upward.