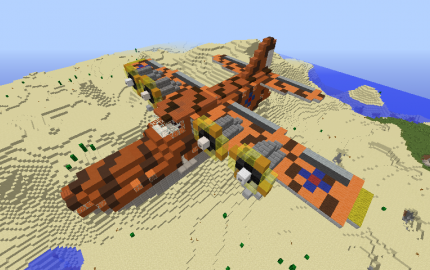 The Mk.3 version of the Sunderland maintains the improved M15A1 cannon from the Mk.2 Sunderland, but is also armed with more weapons and ordinance as a general upgrade in firepower. The camouflage scheme has also been repainted, switching from its naval colours to summer colours.

Main gun:
1x Obsidia M15A1 Self Loading Howitzer.
An improvement over the previous model of weapon. This weapon is slightly longer in the plane's internal space, and has an increased range of up to 180 blocks forward.

Frontal Armament:
6x Fireball HMG. (Upgraded from 4)
Automatic dispenser machine guns Installed on the upper half of the plane, fire controls are behind the pilots' seats.

Defensive Armament:
2x Waist Guns, Left and Right sides.
These guns are powered by the same Redstone Pulser circuit. Turn the Comparators behind the Dispensers on or off to alternate between Left and Right guns.

4x Rear Guns (Upgraded from 3)
These tail guns are pointed backwards and are fully automatic. Lower half has 2, upper half has 2.