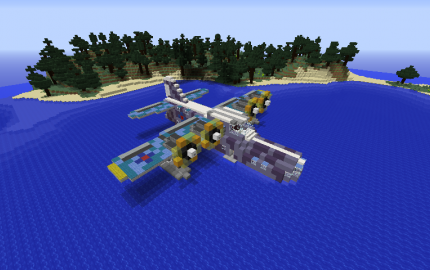 This version has been modified to carry more offensive weaponry and can therefore be used in Minecraft as a support gunship, medium bomber, and anti-ship plane.

Main gun:
1x Obsidia M15 Self Loading Howitzer.
A Semi automatic TNT cannon with an effective range of 70-100 blocks. This weapon was not installed on the original Short Sunderland.

Frontal Armament:
4x Fireball HMG.
Automatic dispenser machine guns Installed on the upper half of the plane, fire controls are behind the pilots' seats.

Defensive Armament:
3x Fireball HMG.
These tail guns are pointed backwards and are fully automatic. Lower half has 2, upper half has 1.