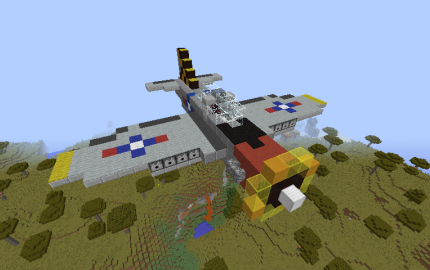 A fully functional and realistically scaled replica of the American-made Republic P47D.

The P47D was a fighter-bomber developed in 1941 to function as a fighter, ground attack, and bomber escort. It was the heaviest single engined fighter, with a weight of roughly 7 to 8 tonnes. It was also heavily armed, carrying 8 Browning M2 heavy machine guns as primary armament as well as 10 HVAR rockets or 2500 pounds of ordinance.

This replica is armed with 8 fully automatic Fireball HMGs. The outer and inner guns in each wing fire in tandem, effectively doubling the overall rate of fire.