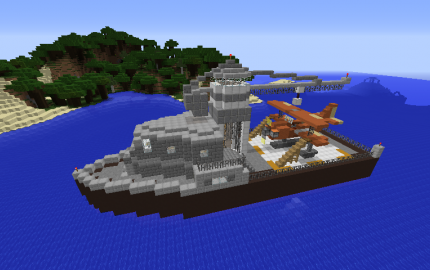 The Tide Farer class was a small-sized, single-aircraft seaplane tender built for reconnaissance and scouting.

It was developed in response to the need to field and deploy seaborne versions of the Robin-type biplane fighter at longer ranges, as well as serve as a repair and rearming platform.

Due to carrying only a single seaplane, the Tide Farer proved to be nimble to navigate and easy to maintain.

Later models were outfitted to fill the other roles of transport ship, freighter, and fuel tanker.

This ship is built with five levels, the crane, the bridge, the main deck, and two lower decks.

The crew quarters provides accomodation for as many as 8 players, each room contains a starter kit of custom and basic items and gear.

NPC Villagers serving as vendors can be found in the Mess Hall and the Workshop.

Aircraft deck contains one Robin-type biplane fighter, and is armed with 3 Fireball HMGs, two synchronized to the engine, one running through the propeller hub.