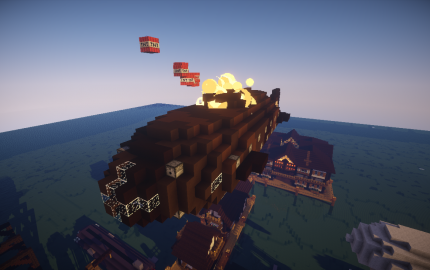 A fully functional submersible air warship that fights and flies using the Movecraft plugin. Everything works. The weapons work even without the plugin (except the torpedoes). Including the main cannon, which is fun to blow stuff up with :)

Background
Sometimes called "mini Shadows", the Trident class of warships was designed to fill the gaps in the pirate Robert Bellamy's growing fleet. They were designed primarily to serve an AA role, to combat the growing threat of fighter attack. As such they carry more AA fire guns than most designs, as well as 3 fighters of their own. In addition, a turret was mounted with the same scatter shot heavy cannons used in the Shadow of the Deep.

Foreward Fire Guns - For shooting down enemy aircraft, or for setting fire to enemy warships once their armor has been pierced.

Broadside AA banks - 13 fire guns on each side, arranged in a dense pattern for maximum fire coverage. Effective at shooting down fighters, or incoming torpedoes.

2 x Firegall Guns - For shooting down other fighters, or setting enemy warships alight once their armor has been pierced.

Finally, if you need help setting up Movecraft, use this tutorial:
http://www.youtube.com/watch?v=8dVEul7hG78