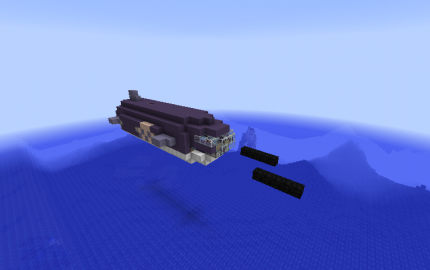 A small submersible torpedo airship that can be flown using the Movecraft plugin for Minecraft.

The original Minnow ships that served as a stopgap measure for Bellamy's pirate group in the aftermath of the Battle of the Argean Sea were quickly replaced by a more technologically advanced model, the Minnow Mk II. This version had armored torpedo tube doors, a technological innovation that would be rapidly copied by shipyards across the lands. These protected the torpedoes inside their tubes, providing significant increases in survivability for the torpedo ships. Additionally, the Mk II had forward firing fire guns, allowing them to set enemy ships ablaze immediately after a torpedo strike had holed the targets armor.

The tradeoff was that the Mk II had only 2 tubes as opposed to the Mk I's 3, and they had a shorter hull. However this was more than made up for by the other improvements, and the Mk II soon a mainstay of the Pirate fleet.