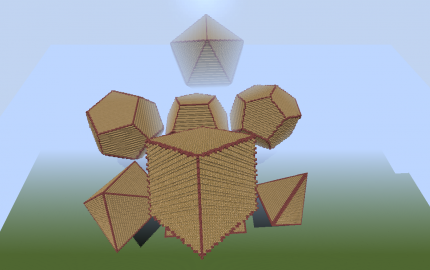 1. Top and Bottom Faces parallel to Game Horizon
(Non Trivial Orientation). Due to ratios of integer numbers with irrational numbers shape is slightly imperfect and has been optimized for "equator zig-zag" appearance, (Top and bottom pentagons centeres not one directly above the other.) Edge Length, 30 Blocks.

Icosahedron
Edge Length, 50 Blocks,
Circumsphere Radius, 48 Blocks.
Orientation with Game axies such as to produce the most perfect shape and most voluminous of all the polyhedra in the package.

It is suggested that these shapes be used either alone or as part of other structures or used to generate other non-Platonic polyhedra to be use as the basis for structures.
Each polyhedron is composed of two different block types, viz. Netherrak for edge delineation and Glowstone for face delineation so an editor such as M.C. Edit can be used to easily generate wire frame models if necessary or faces can be separated from the polyhedra.

Other members are invited to make use of these as raw material for builds that seek to escape the rectilinear nature of Minecraft.

Gradually I am utilizing them in other builds, some examples being:-

The Cubagon which utilizes eight edge-oriented dodecahedrons at the corners of a cube. This was my first attempt.

The Truncoctagon, which utilizes the octagon with its six vertices truncated...hence the name.

The Icosacap Phage, a more recent post that utilizes parts of the icosahedron.