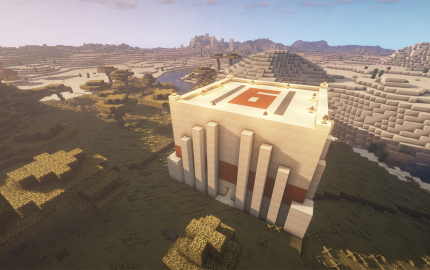 AKA the 'Sweeper', as the hostile mob farm unit of the MBC.
Actually you may find this one slightly different than the other MBC units in appearance, and it is pretty paradoxically special so I would explain a bit later.

Features:
- Is an automatic farm (2-5 monsters / min in hard mode with both sides on under normal world day time).
- Is also an active farm with redstone powered.
- Farms monsters. Usually skeletons, zombies and creepers. Rarely endermen.
- Not all monsters, can NOT farm spiders; can farm witches but not automatically.
- Like the other MBC units, it is very compact with 48 x 4 = 196 blocks as available spawning area.
- Not like the other MBC units, this one can not be stacked vertically unless you modify it.

How to import (in vanilla MC):
1. Read the instruction about structure block on wiki.
2. Place the nbt file under {MC directory}/saves/{your world}/generated/minecraft/structures/.
3. Open your world and type: /give @a minecraft:structure_block 1.
4. Always Include Entities. If you load more than once, turn it off on consequent loads.
5. Load it into your world, structure name = file name.
6. If anything breaks, load it twice after 10 seconds.
7. Replace the structure block with sandstone and it is done.
8. It is also importable by WorldEdit, or anything supports .nbt files.

How to use:
1. Flip the levers of the central pulse control devices on both sides.
2. When you hear piston sounds or see those redstone lamps flickering, go out AT LEAST 20blks AWAY (may varies with mob spawn mechanism updates) for it to work.
3. Wait, and everything would be done automatically. Beware not to go too far (120m? I think), or the monsters may despawn.
4. Check periodically for the loots in the barrels.

Caveats:
- The efficiency of a single farm is kinda pathetic (only because it's small). You may wanna build 3-4 of this and put them in the middle of a lake or within a lit area, so those monsters may only spawn inside.
- like everything with rails, this farm needs 2 minecarts with hoppers to work. In the current version of MC(1.14), tracks may (not guaranteed) break after loaded with structure blocks, so you may need to fix it by yourself. The track goes with a u-shape, all connected and powered. I've put 2 minecarts in the chests nearby if you find any of them missing.
- Probably it will lag a lot on low end PC, like the one I have. It will be way better after you keep some distance as the game engine does not need to render those clocking redstones. You may turn it off by flipping all 5 levers by the entrance and in the very middle on the ceiling to disable monster spawning.
- Witches can't die by fire, so you have to kill them after opening the trapdoors. They won't attack you, If you keep a minor distance.
- Spiders may stuck inside, but it does not matter so much since you can farm anything else (actually they may die by pistons and their loots will still by yours to collect). If you desperately need to farm spiders, you need to modify the farm by opening a 2-blocks-wide side killing area with a little redstone circuit tweaks around. I'm sure you can do this as I have tried but I didn't make it such cause that will decrease the spawning area and make the farm even less efficient since all my other MBC units have the same inner size so I had to make a workaround.

~ Thanks to BSL shaders and Soartex resource pack for the amazing screenshots.
~ Enjoy, please endorse if you like it, and have fun.