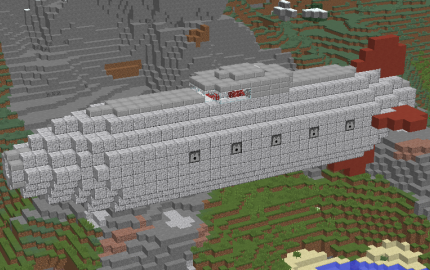 Overview:
The Longbow Assault Gun System is a turretless airship designed by
Gamebreaker Automations Pmc. It is a specialized design, used mainly
for long range engagements and sieges.


History:
The Longbow is built without a rotating turret, instead housing its
primary weapon within its hull. The line of fire is centered towards
the frontal axis of the vehicle, ensuring optimal stability and
recoil absorbtion when firing.

Designed using the doctrine of hit-and-run long range combat, the
Longbow's cannon is designed to break apart the external armor of
hard targets at long distances, then following up with long bursts
of machinegun fire onto the target's then exposed interior. The
machinegun attack is performed while the vehicle is pulled into a
sharp U-turn, allowing it to retreat for another strike.

Armament:
The cannon used in the Longbow AGS is the newly-developed Model
4A21-3 high velocity ship gun, an upgraded derivative of the ADT-151
from the Alpha Harrius Class S Type-A Frigate. While not
exceptionally powerful, its outstanding attribute is its ability to
fire with an uninterrupted range that exceeds 500 blocks.

The cannon's propellant is loaded from the inside of the hull, while the projectiles are loaded externally through a hatch under the front hull.

Its machineguns are embedded in the broadsides, 5 each.

Given the doctrine of engagement for this vehicle, the Longbow lacks frontal and tail machineguns, as it is intended to use its weapons only at long range, and rely on evastion to outrun potential threats.

All weapons are wired to fire from the cockpit.

Protection:
The hull's main external composition is mainly Diorite-P. The upper
and lower sides of the hull are protected with additional SLAB-type
armor plating over the engine deck, forward nose, and belly.