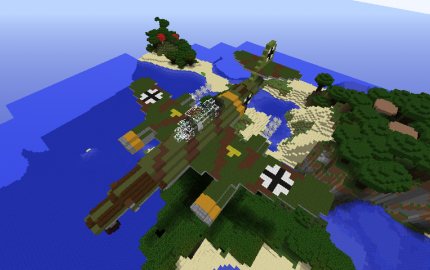 A Minecraft schematic replica of the German-made Me 262, a late-war jet fighter, and the first of its kind to be deployed in combat in mid 1944.

Armament consists of four forward firing Dispensers, each loaded with two stacks of Fire Charges. Weapons are rapid-fire capable, operated via Redstone pulser. Controls are in the cockpit.

Note: Dispensers and Stair blocks may rotate incorrectly if the schematic is rotated or mirrored.

Place on runways or in mid air for best effect.