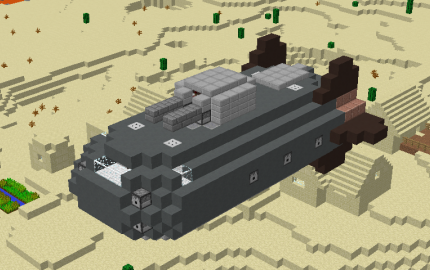 The Kestrel-class Corvette is a lightweight, single turret airship
designed and manufactured by Gamebreaker Automations Pmc.

It is designed to be easily built and assembled quickly and in large
numbers, and its compact design allows for multirole function with
reasonably high firepower despite its minimalist layout.

Unlike other contemporary turret-mounting airships of the time, the
Kestrel is designed for light skirmishes, short range fire support,
low altitude patrol, and ground attack.

It is intended to be used as a complement to larger, more heavily-
armed airships. Defending against or counterattacking smaller,
faster aircraft, or ground-based elements.

As its namesake implies, its main attacking pattern is to hover or
otherwise "scan" the target area form a height of 30-50 blocks with
the cannon set to the lowest arc. Unlike other aircraft which
utilize bombs, the Kestrel's main gun can be fired with a very low
ballistic arc, allowing it to hit ground targets at close forward
range. Its frontal machineguns can also be loaded with Arrows or
Splash Potions for anti-infantry effect.

The Kestrel carries a single cannon mounted in a central turret that
is controlled from the cockpit. The main gun is a licensed copy of
the Loraxe WST adjustable arc cannon, mounted in a modified, up-
armoured turret.

It utilizes 4 frontal machineguns that can be loaded with Fire
Charges, Arrows, or Splash Potions.

The flanks of the vehicle have 3 embedded machineguns that are wired
to fire from the cockpit.

The tail section is guarded by a twin machinegun array under the
engine room.

The hull of the Kestrel is encased in cyanized, solidified CLAY-type
armour casing. Glass parts of the vehicle such as the windshield and
viewports are double-layered with ballistic glass, and additional
SLAB-type plating is used to reinforce the engine deck and belly.

The crew layout consists of 4 operators:

Armor for 4 players is included in the bridge.

>Corrected the Engine's Redstone structure.
>Optimized the pulse generators for the front and broadside machineguns.