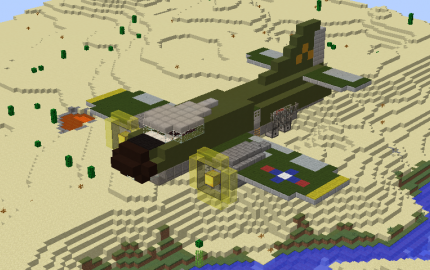 A fully-functional, realistically sized replica of the AC-47 "Spooky" gunship.

The AC-47 is a multigun gunship converted from the standard C-47 "Skytrain" transport plane in 1965.

It was designed to provide close air support for ground-based units. They were historically armed with 3 M134 miniguns on the left side, and attacked by pylon turning over the targeted area.

This version is armed with a pair of tandem-firing Dispensers fed through Droppers. A tail gun installation has also been added.

[*] These are custom splash potions that have been stacked to 64, load these via SHIFT-CLICK only to avoid splitting them up.

Place on runways, in mid-air or over villages for best effect.