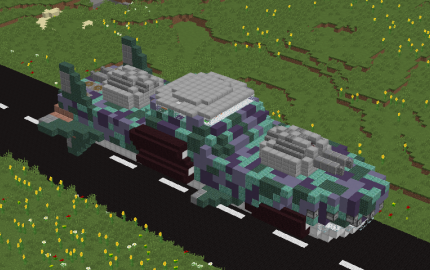 It is built with naval submersible capability, and is well adapted
for ambush manoeuvres against larger, heavily armored targets.


History:
The Piranha was developed in response to an increasingly significant
demand for a torpedo-carrying assault vehicle platform.

The new design of vehicle would be drafted to fulfil three important
aspects:

1. Firepower: It must be able to carry a significant payload,
sufficient to cause fatal damage to a full-size battleship class
target.

2. Mobility: It must be able to stop and accelerate as fast as
possible in the shortest amount of time in order to discharge its
weapons and retreat.

3. Amphibious Capability: The vehicle must be submersible in order
to make use of ambush tactics and improve survivability against
pursuers.

While earlier, larger vehicles such as the Storm Cloud and Barracuda
did possess the necessary dimensions to carry torpedo tubes and the
ammunition, their large size made them vulnerable to counterattacks
as the torpedoes had limited speed, requiring the user to be fairly
close to the target, often within the range of the opponent's
cannons. Even if the salvo could be fired, the user would still have
trouble retreating to reload. They were also unable to effectively
conceal themselves in most water bodies due to their large size.

Smaller vehicles did exist such as the Kestrel and ATVOTA series,
but these were generally too small to mount additional weaponry, and
were even considered to be overburdened by some standards.

As such, a compromise was made in terms of the new vehicle's size.
The new design was built on a medium size frame with a large engine
volume and ample space for a wide variety of weapons.

The Piranha was scheduled for release shortly after the improved
refittings of the Barracuda Class Destroyer and the Stormcloud Class
Battleship but was withheld due to developmental problems with its
APS wiring and initially insufficient torpedo warhead payload.

It has since been released and is available in its base unpainted
form as well as its naval color scheme.


Armament:
The Piranha is one of the most heavily-armed aeronaval airships of
its type to date.

It is armed with two 8ST (Eight-shot Scattershot Turret) gun
systems, as its primary armament, mounted at the front and rear
halves of the vehicle. The cannons have a very high ballistic arc
when the trigger timer is set to the third and forth clicks,
allowing for ambushing targets with upward shots from submerged
positions.

The design of this turret is derived from a licensed copy of the MNST system, from Heavy Hussar Industries.

Its specialized armament consists of six M7T Torpedo tubes, three on
each side, in a over-under pattern. These tubes can be remotely
fired from the tower bridge, or manually launched from the tubes
themselves. These torpedoes utilize a seven-block tandem warhead for
maximum penetration and damage.

Immediately toward the front half of the vehicle are 10 AA Guns
installed above the forward bridge. This number is maximized for
causing maximum incendiary damage following the use of the
torpedoes.


Protection:
The Piranha is built with minimal armor in order to maintain its
light weight. It relies mainly on its acceleration, top speed, and
agility to evade incoming attacks.

It is also equipped with a single centralized APS (Active Protection
System) module that protects against explosive and incendiary
projectiles.


Crew:
The crew of the Piranha consists of four to six operators in the
following layout:

Equipment, consumables, fuel and ammunition are carried aboard.