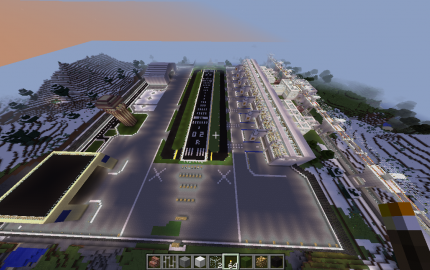 All of this was built again before MCEDIT (I do have other after that). This took one month to build as I had to excavate an entire mountain for a nice piece of flat land (TNT). This airport is very, very large. I believe that I have included most of the surround parts, including my upper level rail station as well as the lower level train station (as I took it to 41 blocks high and low). One Airport Tower, two hangers, one with a propeller plane inside and a service road around the back. Security Fence around the airport. Runway lights and descending landing lights(cut size removed some outer lights). It snows in my area, so the ground may be cover with snow in some areas. It is so big, I had to take an aerial shot. One Runway (I want two) and two Taxi runways. Room for up to 7 planes as there is 7 Terminals bays in this airport. Someday, I was planning on adding a Luggage return section, but it is too much work. I will leave that to your imagination. Every now and then, I come back to the airport to make changes, here is the latest. To measure it up in your world, place the runway height at 68, using F3.

Others creations from ronman101