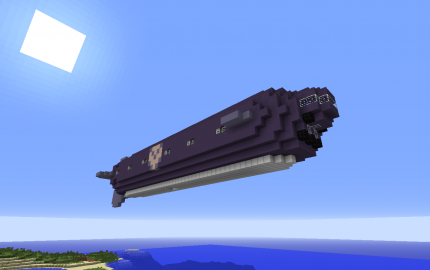 A submersible torpedo airship that can be flown using the Movecraft plugin for Minecraft.

In the video, the Tiger Shark can be seen towards the end of the video.

The Tiger Shark was the second of the pirate Robert Bellamy's famous revolutionary submersible airship designs. Perhaps not as famous as the Shadow of the Deep, but no less deadly. She was designed specifically to combat Royal Navy warships that were occasionally sent to deal with the pirates, and she excelled at her role.

At the time of her loss at the Battle of the Argean Sea (covered in the Minecraft Airship Pirates: The Big Score series of videos), she wielded the deadly Long Arm torpedoes. These huge torpedoes could easily tear through the thickest armor any warship in the skies carried at that time. Her only weakness was a shortage of reloads, a common problem with torpedo ships of that era.

The Tiger Shark influenced Bellamy's designs for years to come, notably in the extremely prolific Minnow class, and represents a hallmark of the Golden Age of Airship Piracy.

Armament
5 torpedo tubes for large torpedos, each carrying 2 torpedos for a total of 10 shots before reloading

12 rapid fire fireball guns, arranged in 2 banks of 6 guns each, port and starboard

Notes
The torpedoes used here will not work below water, and will flood the ship if you try them submerged