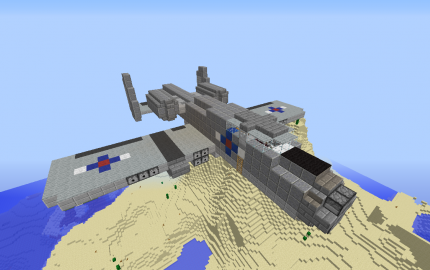 A fully functional, realistically-sized replica of the American made A-10 Thunderbolt attack aircraft.

The A-10 was developed in 1972 in response to a need for a low-speed ground attack and close air support aircraft, after it was learned that high-speed jet fighters such as the F-100, F-105 and F-4 Phantom 2 were poor candidates for this role.

The project resulted in a large-framed, highly durable straight-winged assault plane with a long loiter time and a low stall speed. It is constructed with heavy aircraft armor, effectively maximizing its durability and ability to withstand damage. It is also known to mount the largest rotary cannon of any kind, the 30mm GAU-8 Avenger, in addition to 11 hardpoints for external ordinance.

This version of the A-10 is armed with 20 automatic Fireball HMGs, and 16 TNT Dispensers. All weapons are pulser-driven and fully automatic. Fire controls are housed in the cockpit along with one set of standard gear.