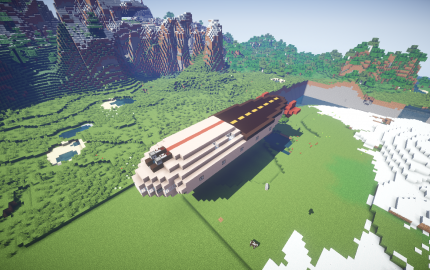 Overview
The Raiders were originally created for the purpose of seizing "forfeited" property, often deep behind enemy lines. To this end they were designed to operate independently, and given a wide variety of weapons and capabilities. They have an impressive fighter carrying capability for a ship so small, although they lack any protected hangar deck like the larger escort and fleet carriers of the Silver Empire.

During the War of Acquisition, they became popular for a wide variety of tasks, owing primarily to their efficient use of resources as they could be constructed cheaply and quickly. Often they would server as remote aircraft tenders, re-fueling and re-arming fighter and bomber squadrons in the field and greatly increasing their effective range. They also served as mobile headquarters, allowing the Silver Empire to project power in an area without diverting many resources from their other operations.

Armament
1 x Main Cannon (long range). A simple and effective weapon, characteristic of Silver Empire designs. Lacking any special machinery or complicated control mechanism, the range is simply changed by changing how many propellent dispensers are loaded with TNT. It does have a simple fuse control mechanism, reachable through the gun deck. (Note: you won't see far enough to see the explosion of the projectile unless you unload the TNT from one of the propellant dispensers)

2 x Foreward Torpedo Tubes (medium size). In recognition of its varied roles, the Raider is equipped with both a cannon and torpedo tubes. Only 2 total torpedoes may be loaded at once.

2 x Foreward Fire Guns. After piercing a target warships armor with the cannon or torpedoes, the fire guns are typically used to deliver the killing blow by setting the enemy ship aflame.

10 x Broadside Fire Guns (5 on each side). Typically the broadsides are used to shoot down enemy fighters or incoming torpedoes. The firing arcs of the guns overlap to deliver maximum fire coverage.

Rear cargo loading ramp - This ramp can be deployed after landing to easily load cargo onto the ship. The ramp is deployed by rotating into place.

Forfeiture and Signatory storage - Ample room is provided for storing goods and live cargo seized during a raid. The storage area is easily accessed right off the cargo loading ramp.

Crew quarters - Quarters are provided for the crew, with separate larger quarters for the Captain.

Flight Deck - A simple flight deck is provided, and can service 3 aircraft easily. Up to 5 can be fit, although ease of access suffers.