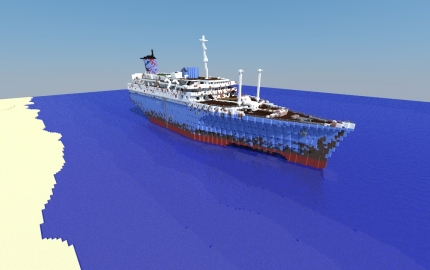 Stranded in 1994 off the coast of Fuerteventura, the S.S. American Star is one of the most famous shipwrecks in modern history.

This is my recreation of the wreck as it looked like in 2004.
After looters went through the ship, not much reminded of once better times.

The SS American Star was sold in 1993 in order to become a 5-star hotel-ship in Thailand. On her way to Thailand, she and her tugboat entered a thunderstorm in the Atlantic.
The tow lines broke and four men were sent aboard the ship to reattach the emergency tow lines.
This proved unsuccessful. So the four crew members on board were rescued by helicopter leaving the American Star adrift.
She stranded bow first, leaving the stern section of the ship floating above ground. Because of the ongoing storm, the ship broke in two.

Soon, looters would enter what's left of the ship and remove or destroy everything that wasn't bolted on the floor.

Today you can barlely see what's left of the ocean liner.