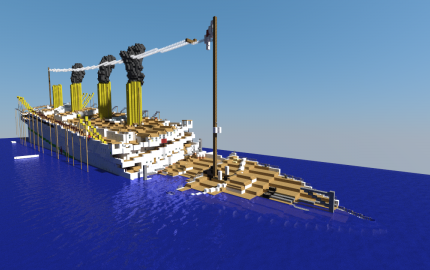 This is the sinking of the H.M.H.S. Britannic.
Britannic was the sister of the R.M.S. Olympic and the famous R.M.S. Titanic.
She was used as a hospital ship during the beginning of the first world war. On November 21st at 8.12 a.m. she was hit by an underwater mine by the German submarine U73.

Britannic sank within 55 minutes causing the deaths of "only" 30 people. Most of them died in two lifeboats which were struck by the moving propellers of the ship.

This is just a model. There is no interior!