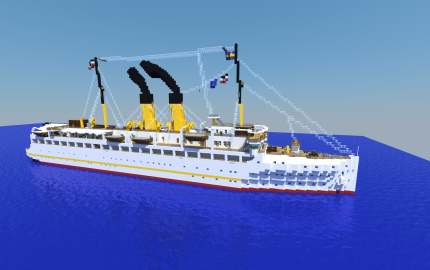 This is the recreation of a German train ferry. It has full interior and carries a locomotive and a few passenger cars.

Put into service in 1909, the train ferry "Preussen" transported railway vehicles on the route Sassnitz (German Empire) to Trelleborg (Sweden)

-The ship served in world war 1 as a "Hilfsminenleger" to transport sea mines. She was able to carry up to 4000 mines at once.

-During world war 2, the Preussen continued her ferry service until September 26th. 1944.

-After World War 2, the Preussen was given to the Soviet Union as part of the war reparations and renamed "Kriljon".

-From 1975 to 1985, renamed "Morskaja I", the ship served as a barracks ship during the construction of the harbor "Wostotschny".

-No information as to what happend to her after that. She was most likely scrapped shortly after 1985.