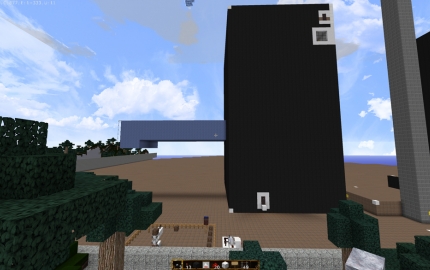 First there is a small error in version II. It concerns the safety door on the sorting floor only half the door is created. I wanted to replace it with the correct version but I cannot work out how to do that other than replace the lot. I had a fairly serious comment saying they had been transported a 1000 blocks. The only thing I can find that caused it for them is that they didn't tick the calculate coords when inserting the schematic.

Well update 3 is here and probably it will be the last. I have changed the player elevator and added an extra floor also you can now summon the elevator from all floors 4 now. If I had continued with the scheme I used previously this would have meant a lot of command blocks hanging around each floor. So instead all the command blocks needed are housed in a control room on the bottom floor. They are executed by small modules at each floor. This shows a clear way of executing a chain of command blocks remotely.

This update was mainly motivated by the fact that in my world Naboo the drops from the mobs are railed out of the mob farm to a remote location more than 400 blocks away. I did not want to put this entire thing in a schematic so this is a cut down version which gives you the necessary to implement this. You only have to provide the rail. You will find various killing machines for mobs. That sounds counter-productive but they are tuned to not intrude into the spawning chamber. I am probably an exception but fighting mobs bores me hence the killing machines. Beware I hate enderman so enderman perish if they are within a radius of 200 blocks from one of these killing machines.

I have also modified the kludgy fence arrangement on the large top door there is now a lever inside and outside that will open and close a glass panel.
------------
Here we are again another update I found the collection chamber was not flushing out properly, I have known this for some time. I have redesigned that made the bigger and make sure it is part of a sphere, concave part that is. Next problem those damn witches a 30 block drop does not reliably kill a witch. We now have a 40 block drop. On testing it kills the witches far more reliably fact I haven't seen it fail yet. To be doubly sure though a witch hanging around will eventually walk into the ultimate death, I have provided a hole so that they will fall out the bottom of the world. Consequence was though it is now a long way on one floor to another. There is now a two level player elevator to get from one floor to another. The item elevator had to be extended and is now 41 blocks high. Warning there is now a bit less than 30 command blocks in the creation. MCEdit does not update command blocks properly if you rotate when making the insertion. The person elevator on use then will put blocks in the wrong place.
------------
Hi beginning of this year March to be precise I put up a mob farm which has been downloaded over 100 times. Recently I thought I might update it and here the result. There are various features that I thought those of you that were interested might appreciate. There are too many features that I have adapted from others to give them all due credit. Suffice it to say none of the Redstone mechanisms in this are in fact my own but are adaptions. In the collection part I have added witches and found they are very difficult to kill. Tried squashing them with pistons immersing them in lava but these did not reliably work so the only choice was the big drop. This created collection complications so there is an item elevator that will automatically transport items about 33 blocks upwards into the sorters. You may be wondering why I persisted with the lava for other mobs the catch is the behaviour of slimes, a large slime will drop 30 blocks but just clogs up the works because it breaks into four of slimes not into slime balls. Once the dropped items get into the sorters obviously they are are separated into the various categories. These are then transported with chest carts to the final storage. The design has three large chests per item. Depending on your rail system you could transfer your loot a long way from the farm. Final note there is a peculiar mechanism at the bottom of the upper collection hoppers. This is there because of baby zombies they go through the system get trapped in that area and clog the works up I have put a water stream which moves them into a lava pit. PS Position spawn height at level 55 and make sure biome is swampland.