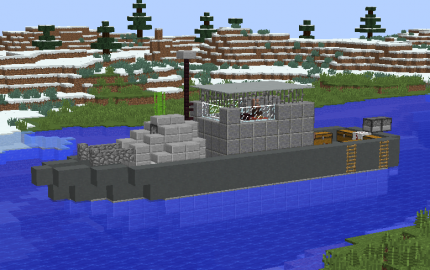 This second version of the Patrol Boat is armed with a self-loading howizer/cannon, which can be fired from the inside of the bridge. The cannon has a range of approximately 110 blocks forward.

Schematic comes with 3 named crew members (Helmsman, Gunner, and Deckhand), each of which sell custom items, consumables, and ammunition. All are immobile via attribute editing.

Standard gear and ammunition are loaded on board.