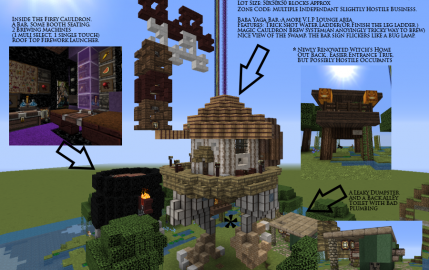 I think this thing could be described as a confabulation. I started this thing like a month ago. At first I just wanted to replace the not very epic vanilla witch hut with the mythical Russian folklore witch Baba Yaga and her chicken leg house. Then I added the dumpster and toilet for laffs. Then I started experimenting with a bunch of different push-button brewing systems, and built another witchy themed bar shaped like a big black couldron. Any way who reads this crap heres some witch/swamp themed shit, stick it in a swamp and push the fireworks button.