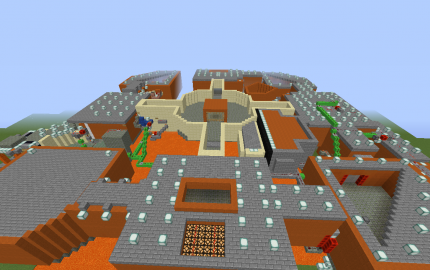 DOOM E1M9 - [Military Base]
Recreation of the Ultimate DOOM level Military Base, by ID Software. This is the secret level you reach from level 3 by crossing the lava pit - one of the hardest secrets to get in the whole game, because it basically requires you to jump into lava at least twice, and live. The level is smaller than most of them and has a fairly simple layout, but is the first level to make use of all 3 coloured doorkeys (Yellow, Red and now Blue).

The level is smaller so the automated reset plates at the start aren't as laggy, but there is quite a bit to reset - almost every door in the level stays open once you open it. This level uses Craftbook [Gate]s and [Bridge]s and multiverse portals to operate. Also, like all the other levels, it does NOT use command blocks in any way, though could easily be modified to do so.

This level was built in creative using WE to make sure everything was actually even - I ended up having to rebuild it once because the rooms were a few blocks out of alignment. This level, and the ones before it, also makes use of a custom PreciousStone called a Pain Block, which inflicts minor damage per second, which is used to simulate the burning effect of the acid in DOOM, but this could be done in many other ways and will not really impact the gameplay.

The schematic pastes in-game South-West of you, above your head and roughly 3 blocks above the ground at the lowest point. The bulk of the level is at least 7 blocks above you.

I claim no ownership over DOOM or this level's design - I simply remade it in Minecraft for everyone to enjoy :)