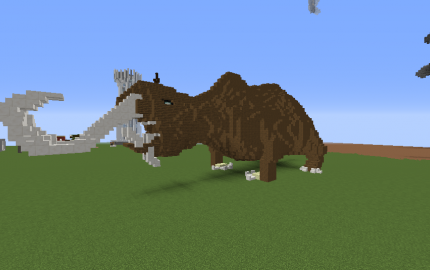 Isti-Papa was a mythological monster of the Southeastern Native American tribes, a huge carnivorous creature that preyed on humans. Its appearance varied greatly from tribe to tribe-- in some tribes Man-Eater was described as being bearlike, similar to Naked Bear monsters of the northern tribes. In others, such as the Creek and Seminole tribes, Man-Eater was described as a feline monster similar to a giant mountain lion. In the Alabama and Koasati tribes, many modern people associate Big Man-Eater with elephants. This build is based off of the Koasati tribes' description of the creature. Some folklorists believe the legend of Man-Eater may have been inspired by mammoths or mastodon fossils. In any case, although the monster's name is translated as "Cannibal" or "Big Cannibal" in some texts, that is a slight error in translation. The Native American names for this monster literally mean simply "man-eater." This creature is not human or humanoid in any story that we know of, but is always a giant four-legged animal.