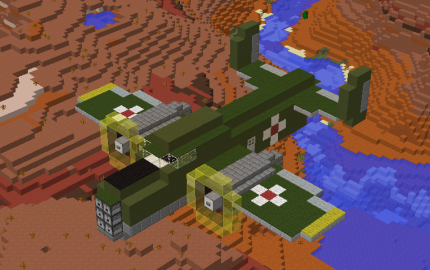 A functional and realistically scaled replica of the North American Aviation B-25 medium bomber, J variant.

The B-25 was designed in 1940 and first used in 1941. While designed as a medium bomber, its large, sturdy build allowed it to serve other roles such as that of a gunship, ground attacker, and reconnaissance. It was one of the most versatile twin engine medium platforms of the time, having seen use by many nations even after the war.

This version is armed with Fireball machineguns and TNT dispensers, and is crewed by 3 operators.

Place in mid-air or on airfields for best effect.