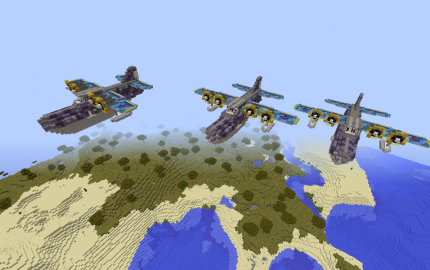 The Mk.2 version of the Sunderland is equipped with the improved Obsidia M15A1 self-loading cannon/howitzer. This weapon contains no "compressor charge" in its firing mechanism and instead uses flowing water to "compress" the propellant. This is due to the fact that TNT as entities now move in flowing water, thereby eliminating the need for compressor charges.

Main gun:
1x Obsidia M15A1 Self Loading Howitzer.
An improvement over the previous model of weapon. This weapon is slightly longer in the plane's internal space, and has an increased range of up to 180 blocks forward.

Frontal Armament:
4x Fireball HMG.
Automatic dispenser machine guns Installed on the upper half of the plane, fire controls are behind the pilots' seats.

Defensive Armament:
3x Fireball HMG.
These tail guns are pointed backwards and are fully automatic. Lower half has 2, upper half has 1.

Changes and Edits:
> Replaced the Obsidia M15 with the improved Obsidia M15A1.
>Fixed the levers for the forward machineguns and the TNT dispensers.
>Vehicle length increased by 1 block forward.
>Roof blocks switched from Quartz Slabs to Stone Slabs.