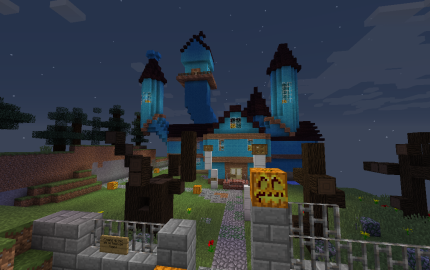 A haunted house I made as a"welcome center" for Halloween Land on my old server. I had a lot of ambitious things planned for the area including trick-or-treating, card collecting, monster cereals, and other assorted goodies and quests. Inside the house you can find many of these collectible cards and items. I still find it sad that I was so disorganized with making my adventure areas on that world that most of them remained half-finished, and also that most players never seemed to visit them much anyway...and it was hard to make such things work on a purely vanilla server anyway. This is why I stick to making downloadable adventure maps/schematics now for that sort of thing.

Also included in the zip file is a giant jack-o-lantern with bleeding eyes I made on an old server. inside it has a little room where you can store things. I didn't include a picture of it, because it's honestly kind of ugly and weirdly shaped, but it still has sentimental value and at least looks cool on the inside. Maybe I'll make a better looking one someday.

Both of these schematics are for Minecraft Java Edition 1.12.2. The world save url contains both of the schematics mentioned.