WOW The Tomb Of Sargeras 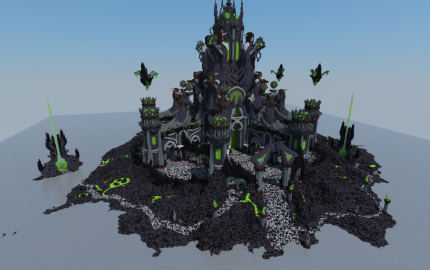 This is the first huge build made by Eternal Dawn. We build Word of Warcrafts Tomb of Sargeras in Minecraft. The terrain is inspired on the original terrain. We hope you enjoy our content :)

This build includes:
-The tomb of Sargeras
- Portals
- WOW inspired terrain not the original

The Tomb of Sargeras (formerly the Temple of Elune, and simply referred to as the Tomb) is a great structure situated on the island of Thal'dranath in the Broken Isles. The Guardian Aegwynn imprisoned the corpse of the Avatar of Sargeras in the deepest parts of the Temple, miles beneath its surface, after she defeated it 800 years ago. After centuries of having been submerged under the sea, the influence of the dark power of the Avatar worked its influence upon the halls of the Tomb, twisting it with fel energy.

The Tomb was raised back to the surface by the warlock Gul'dan during the Second War, but he was torn apart by the demonic guardians within before he could claim the power contained inside the Tomb. Later still, during the Third War, the structure was visited by Illidan Stormrage in search of the Eye of Sargeras. Following the defeat of the Burning Legion on the alternate Draenor, the Tomb was reopened by alternate Gul'dan to allow the Legion entry into Azeroth once more.