WOW The end of time Deathwing 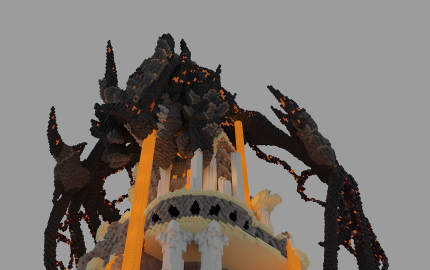 This is the second World of Warcraft recreated build made by Eternal Dawn. We build Word of Warcrafts Raid `The end of time` where Deathwing died on top of Wyrmrest Temple in Minecraft. We hope you enjoy our new content :)

The Dragon Aspects that occupy Wyrmrest Temple have a problem: They know that if they cannot destroy their fallen brother Deathwing, he'll consume the world. There’s only one artifact with the power to weaken the Black Scourge, but it has long since been destroyed: the Dragon Soul. To retrieve the golden disk the Aspects must charge the heroes of Azeroth with its retrieval from the depths of time. Deathwing first unleashed the power of the Dragon Soul to stop Sargeras and the Burning Legion from entering Azeroth through the Well of Eternity. That means sending players to the Caverns of Time and Nozdormu. Upon arriving, the Aspect of Time will tell them that his ability to send them back to the battle at the Well of Eternity is being interfered with by an entity in the future. First then, players must go forward into the End Time and kill Murozond. Within they'll witness a charred vision of the world should the plan to defeat Deathwing fail.

One of an infinite number of potential outcomes, this timeway depicts the desolate future of Azeroth should its defenders fail to stop Deathwing. In this bleak future, Nozdormu has identified an anomaly that bars access to both the past and the Dragon Soul: a powerful creature from out of time, living alone amid time-twisted echoes of the past.

In order for Nozdormu to provide you the ability to travel back in time to a point before the Dragon Soul was hidden by Malfurion Stormrage from anyone who’d seek its power, you must first go to a distant and desolate future to discover the anomaly blocking the past. You'll find yourself in a very different Dragonblight, stripped of its snowy landscape, with little more than ruins of the once-great dragonshrines. Wyrmrest Temple itself stands only as a reminder of Deathwing's madness—what's left of his scorched remains is impaled atop the structure.

Before you confront the creature disrupting Nozdormu's access to the past, you'll first be called to fight any two of the following four ostensibly familiar leaders, chosen at random each time you play through End Time.

These long-dead heroes are mere echoes of their former glory, further warped by the corruptive force of time. Their presence here is a great mystery, even to Nozdormu. Once these shades have been laid to rest, the maniacal figure blocking Nozdormu's vision will be revealed at the End Time. None of the Dragon Aspects could have predicted what entity would have such power to interrupt the sight of the Timeless One… the ability to create a new and infinite dragonflight. Only by destroying a mysterious dragon known as Murozond will you give Azeroth's protectors the opportunity to avoid the potential outcome to which your eyes bear witness.