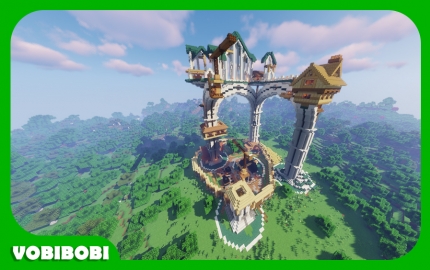 Lelia Sanctuary (after the ruination)


Village features:
-an elevator in one of the "legs"
-shelter inside walls
-mob proof (most of the time)
-visibility from far away (though not as beautiful as before)
-every profession block featured
-not fireproof anymore, beware of termites too
-super cool sun that is actually super dead
-enough space for yourself, your son, your son's dead sun and many villagers


"A hundrad years after the descend of the star Lelia and its rampage upon the living it was finally safe to set foot near the Sanctuary as the void of the false light has finally perished into the depths. The cold body of the evil star is mined and used as a fuel after the local villagers set up a mining camp in the ruins. A place of worship now stands as a new begining to mortal men who find no solace in the arms of gods. New era has finally begun."