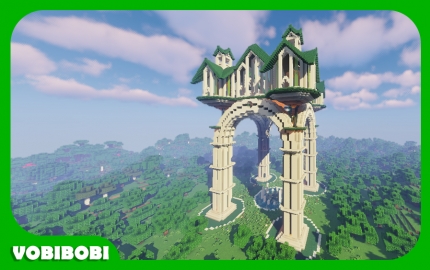 Lelia Sanctuary (before the ruination)
This is a recreation of my castle from my old account.

Castle features:
-elevators in every "leg"
-shelter on high ground
-mob proof (most of the time)
-visibility from far away
-tranquil fountain with gravity distorted water at the bottom
-fireproof (don't go too close to the center)
-super cool sun god that is actually evil
-enough space for yourself, your son and your son's sun

"After the Great war and the fall of the gods, priestesses of Alantie sought for an unspoiled source of solace in the newly born star, Lelia. They built a sanctuary beneath it's dim glow and prayed for it's descend, to share it's bliss among the mortals. Their prayers might just come to be, for the glow of the false sun casts shadows that promise another demise." - to be continued...